Does jock itch smell bad and if it does, what does it smell like? Jock itch is a groin infection that is caused by an overgrowth of fungi. Apart from the embarrassing rash and itch, the condition could also get uncomfortably smelly. How do you deal with that? It is possible to get rid through self-care.

Jock itch can be transmitted from men to women not because it is an STI but when there is skin to skin contact between a man and a woman, specifically in the groin area. This is likely to cause the transmission of the fungal cells that will eventually start growing on the skin and cause symptoms such as itching and sometimes small bumps on inner thighs.

After some time, you might start experiencing your body odor changing. It is not because you did not clean your armpits, but because as the fungal infection spreads, the activity on the skin may start to smell or produce a bad odor. But how bad is the odor or stink? How does it smell like?

A question that is likely to be asked by persons suffering from jock itch is; does jock itch smell or does jock itch have a smell? In most cases, jock itch affects a person because the genital area is conducive enough for an overgrowth of fungi. As they increase around the area, they start feeding on the skin and a full-blown fungal infection is experienced. People who engage a lot in activities that cause them to sweat are more prone to this infection.

As the population of the fungi increases, their metabolic activity increases as well. Their increased by-products then lead to a foul smell emanating from the area. Too much sweat in the groin area makes the smell even worse.

Those who have experienced the jock itch smell describe it as being cheesy and musky. Although this rarely happens, the smell could be noticeable to those around the affected person leaving you feeling self-conscious and embarrassed.

In order to prevent the infection from becoming smelly, there are activities that you can engage in. these will also help to clear up the infection and the stink or terrible smell. You should start off by drinking a lot of water. This will provide an excellent way of flushing out toxins from the body. As a result, the odor will be minimal.

To reduce sweating, avoid wearing tight clothing. This will allow the groin area to have enough air as well. Wearing clothes made from cotton is encouraged to help in keeping the area dry. The absence of moisture will help in reducing the foul smell.

Vinegar, baking soda, and tomato pulp are also great at absorbing the odor. Make a paste of baking soda and use a bath cloth to rub it around the area. To use vinegar, add a tablespoon of it to a cup of warm water. Use this to clean the area. The same should be done with tomato pulp. These should be used at regular intervals throughout the day to keep off the jock itch smell.

Although this is rare, there are instances in which jock itch could smell bad. This is most common in patients who do not maintain personal hygiene. Discharge from the infection and yeast activity may cause bad odor. If you have discharge, see a doctor. People who sweat a lot and take long before bathing is likely to experience this.

If the smell is severe and uncomfortable, try some treatments and remedies

It is also possible for unattended jock itch to smell. Where you do not seek treatment for the same, the fungi will continue to increase. With an increase in population, there also will be an increase in metabolic waste. Such situations could also lead to blistering and oozing around the infected skin. All these, when combined, will lead to a foul smell.

Does female jock itch have a smell? Where the symptoms of jock itch escalate to a point where there is a foul smell, it is a cheesy, musky one. The smell may, however, differ from patient to patient since individuals have different body odors. What you have consumed, the type of treatment they are using and their body odor could distort this smell as the toxins are expelled from the body through sweat.

In most cases, a cheese or fishy smell is attributed to bacterial infection. Sweating in the groin area could also lead to this.  The smell is most likely to be harbored in the area between the scrotum and the penis in men. This area tends to be warm, has an area of skin to skin contact and is sweaty as well. This gives room for the growth of fungus and as a result the bad odor like that of stale cheese or fish. Ensuring that this area is thoroughly cleaned and dried could go a long way in getting rid of the fish smell.

Is Jock Itch Contagious Orally, How Long is...

Can discoloration be treated ? I am terrified ? 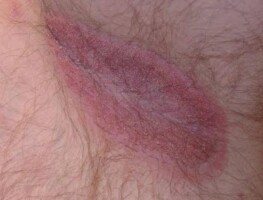 Belly Button Lint Causes, Why Does It Smell, How to Clean Lint in Your Belly Button